DistributedLog began its life as a separate project under the Apache Foundation. It was merged into BookKeeper in 2017.

The DistributedLog API is an easy-to-use interface for managing BookKeeper entries that enables you to use BookKeeper without needing to interact with ledgers directly.

The diagram below illustrates how the DistributedLog API works with BookKeeper: 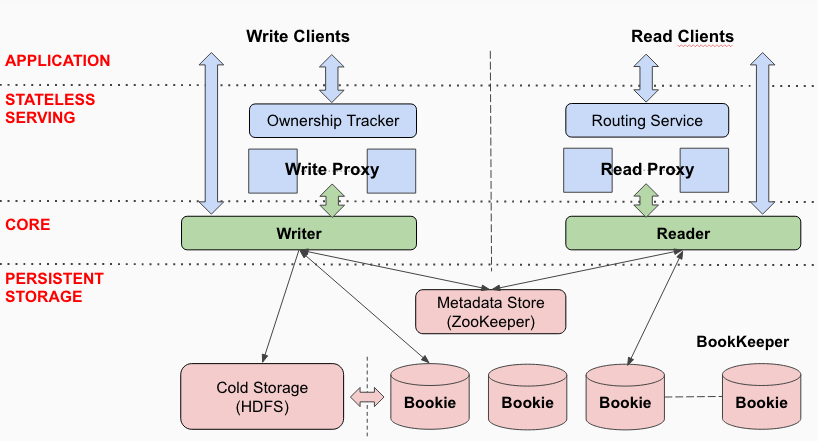 The diagram below illustrates the anatomy of a log stream: 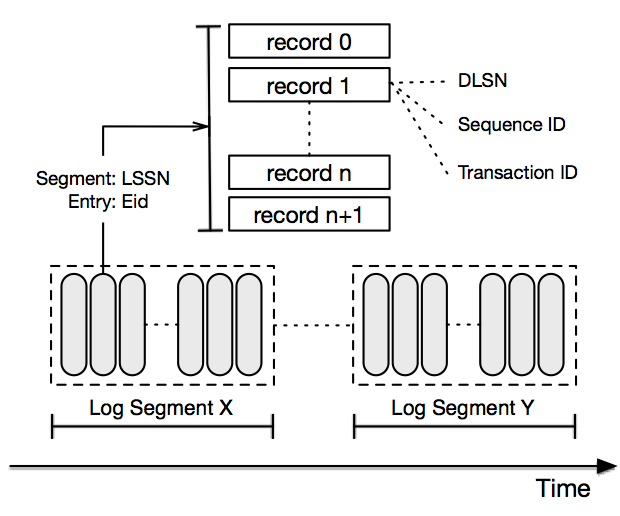 Each log record is a sequence of bytes. Applications are responsible for serializing and deserializing byte sequences stored in log records.

Log records are written sequentially into a log stream and assigned with a a unique sequence number called a DLSN (DistributedLog Sequence Number).

The data in logs is divided up into equally sized log segments and distributed evenly across bookies. This allows logs to scale beyond a size that would fit on a single server and spreads read traffic across the cluster.

Through the DistributedLog API, writers write data into logs of their choice. All records are appended into logs in order. The sequencing is performed by the writer, which means that there is only one active writer for a log at any given time.

DistributedLog guarantees correctness when two writers attempt to write to the same log when a network partition occurs using a fencing mechanism in the log segment store.

Log writers are served and managed in a service tier called the Write Proxy (see the diagram above). The Write Proxy is used for accepting writes from a large number of clients.

Unlike other pub-sub systems, DistributedLog doesn’t record or manage readers’ positions. This means that tracking is the responsibility of applications, as different applications may have different requirements for tracking and coordinating positions. This is hard to get right with a single approach. Distributed databases, for example, might store reader positions along with SSTables, so they would resume applying transactions from the positions store in SSTables. Tracking reader positions could easily be done at the application level using various stores (such as ZooKeeper, the filesystem, or key-value stores).

Log records can be cached in a service tier called the Read Proxy to serve a large number of readers. See the diagram above. The Read Proxy is the analogue of the Write Proxy.

The DistributedLog API for BookKeeper provides a number of guarantees for applications:

Documentation for the DistributedLog API can be found here.

At a later date, the DistributedLog API docs will be added here.

An entry is a sequence of bytes (plus some metadata) written to a BookKeeper ledger. Entries are also known as records.

A ledger is a sequence of entries written to BookKeeper. Entries are written sequentially to ledgers and at most once, giving ledgers append-only semantics.

A bookie is an individual BookKeeper storage server.

Bookies store the content of ledgers and act as a distributed ensemble.

A subsystem that runs in the background on bookies to ensure that ledgers are fully replicated even if one bookie from the ensemble is down.

Striping is the process of distributing BookKeeper ledgers to sub-groups of bookies rather than to all bookies in a BookKeeper ensemble.

Striping is the process of distributing BookKeeper ledgers to sub-groups of bookies rather than to all bookies in a BookKeeper ensemble.

When a reader forces a ledger to close, preventing any further entries from being written to the ledger.

A record is a sequence of bytes (plus some metadata) written to a BookKeeper ledger. Records are also known as entries.